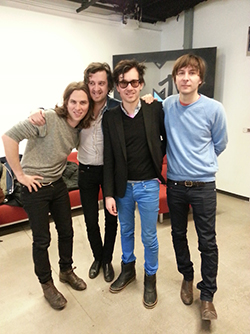 Vocalist Thomas Mars, bassist Deck d’Arcy, and guitarist Chris Mazzalai started playing together as a “garage band” based out of Mars’s house in the suburbs of Paris, France. In 1995, Laurent Brancowitz, Mazzalai’s older brother, permanently joined the band on guitar after the end of Darlin’, a short-lived band that Brancowitz had formed with Thomas Bangalter and Guy-Manuel de Homem-Christo (Bangalter and de Homem-Christo later formed Daft Punk.) Two years later the band took on the name Phoenix and pressed 500 copies of a single on their own label, Ghettoblaster. Shortly after, they were signed to the Paris-based Source Records. Phoenix became well acquainted with labelmates Air when they acted as their backing band on several U.K. TV appearances